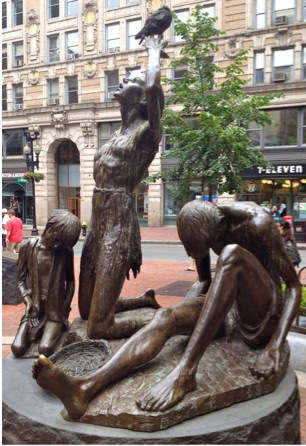 Born and raised in New England, I grew up hearing about the celebrations that take place in Boston every year on St. Patrick’s Day. To say my boyfriend and I were excited to be experiencing it for ourselves for the first time was an understatement. Driving into the city to meet up with friends, we really had no idea what we were getting into. While live Irish music filled the streets, there were lines out the door of every restaurant, pub and club. People were dressed head-to-toe in green, and you could tell they’d been in Boston all day.

As we walked the crowded streets, an old saying popped into my head: “Everybody’s Irish on St. Patrick’s Day” and it got the genealogist in me thinking.

From 1845 until 1850, Ireland’s population of 8.5 million people suffered immensely of starvation and disease due to one of the 19th century’s greatest catastrophes, “The Great Hunger.” Brought on by potato crops devastated by a disease known as potato blight, one third of Ireland’s population — which depended on the potato as their main source of food — watched helplessly as their crops were ravaged. To make matters worse, the British government added to Ireland’s suffering by continuing to export large quantities of food and livestock from Ireland despite the fact that people were dying of hunger.

While a million people died of starvation and disease, half a million people were evicted from their homes, thrown into a life of poverty. As a result, in a desperate attempt to survive, two million of them left Ireland emigrating to England, Scotland, Australia, Canada and the United States.

Although Boston was quick to respond to the potato famine, sending 800 tons of food, supplies and clothing to Ireland in March 1847, Bostonians were less than thrilled when Irish refugees began pouring into their city by the thousands. In 1847 alone, 37,000 sick and impoverished Irish immigrants landed in Boston settling along the city’s waterfront in cramped shacks. Fleeing their homeland in hope of survival and opportunity, our Irish ancestors were faced with intolerance and adversity.

As they settled into their run-down flats, our ancestors were then confronted with the challenge of finding work. Due to anti-Irish job discrimination and lack of experience, many found themselves working as servants, which lead to some Americans viewing the Irish as an uneducated servant race. If they weren’t working as servants they took up jobs in factories and worked as laborers. Resented by the American working class for their willingness to work for meager wages, their determination to make it in America was unjustly viewed as greedy and desperate.

Ostracized for their religion and ridiculed for their home life, the Irish were discriminated against on many different levels. Many parents decided to scrap popular Irish names such as Bridget and Patrick in an attempt to Americanize their children, while escaping the derogatory meanings the names had taken on in America. It wasn’t uncommon to find cartoons regularly featured in Boston newspapers depicting the Irish as immoral, illiterate alcoholics who were always looking for a party and a fight.

As I walked the streets of Boston with my boyfriend and friends, I found it impossible not to smile. Surrounded by a sea of people dressed in green, I couldn’t help but wonder how my ancestors would have felt seeing their descendants openly celebrating their Irish heritage in the streets.

Leaving behind the starvation and poverty they faced in Ireland for a fresh start and chance of survival in America was hardly an easy transition. Thanks to their hard work, determination and resilience they were able to survive the famine and make America home.