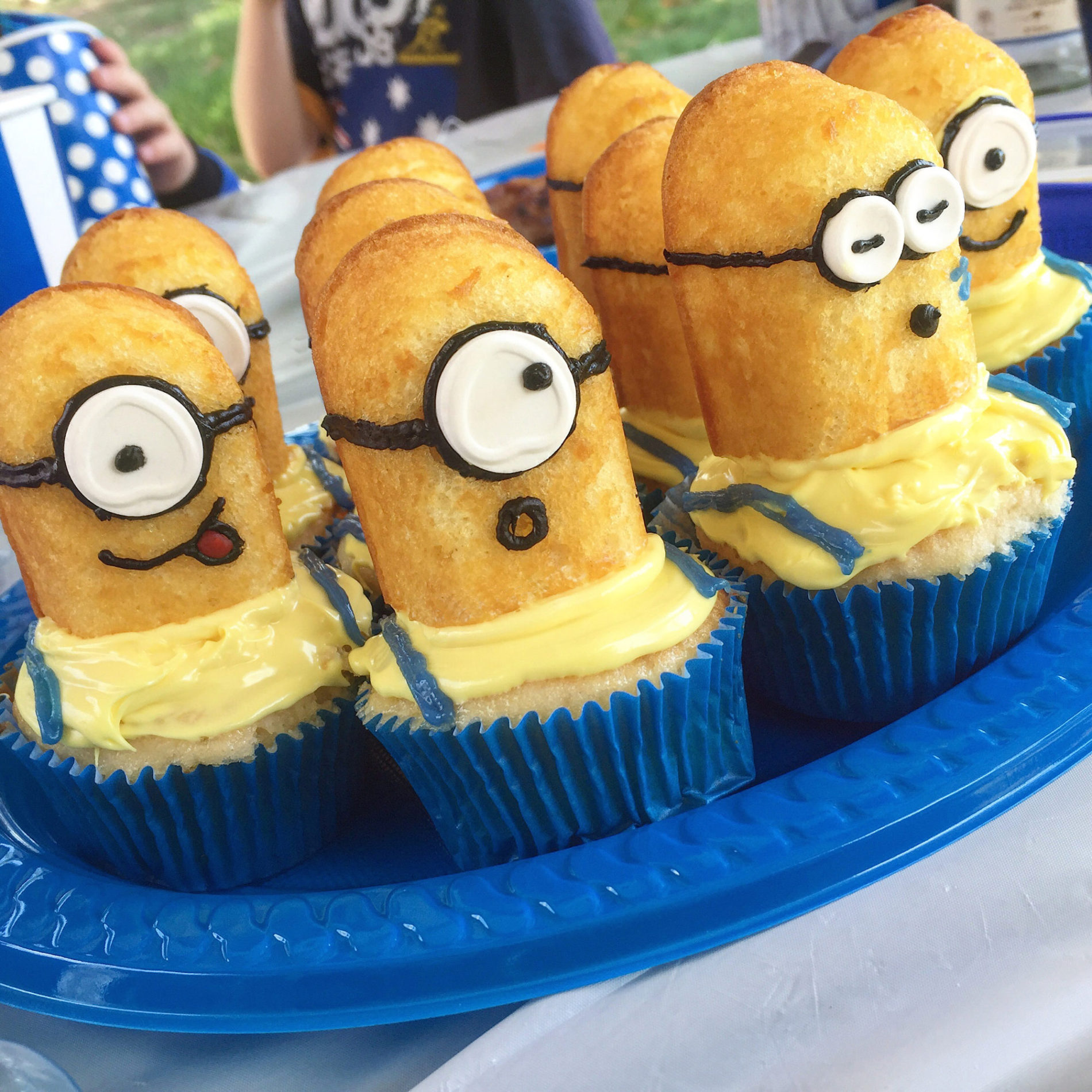 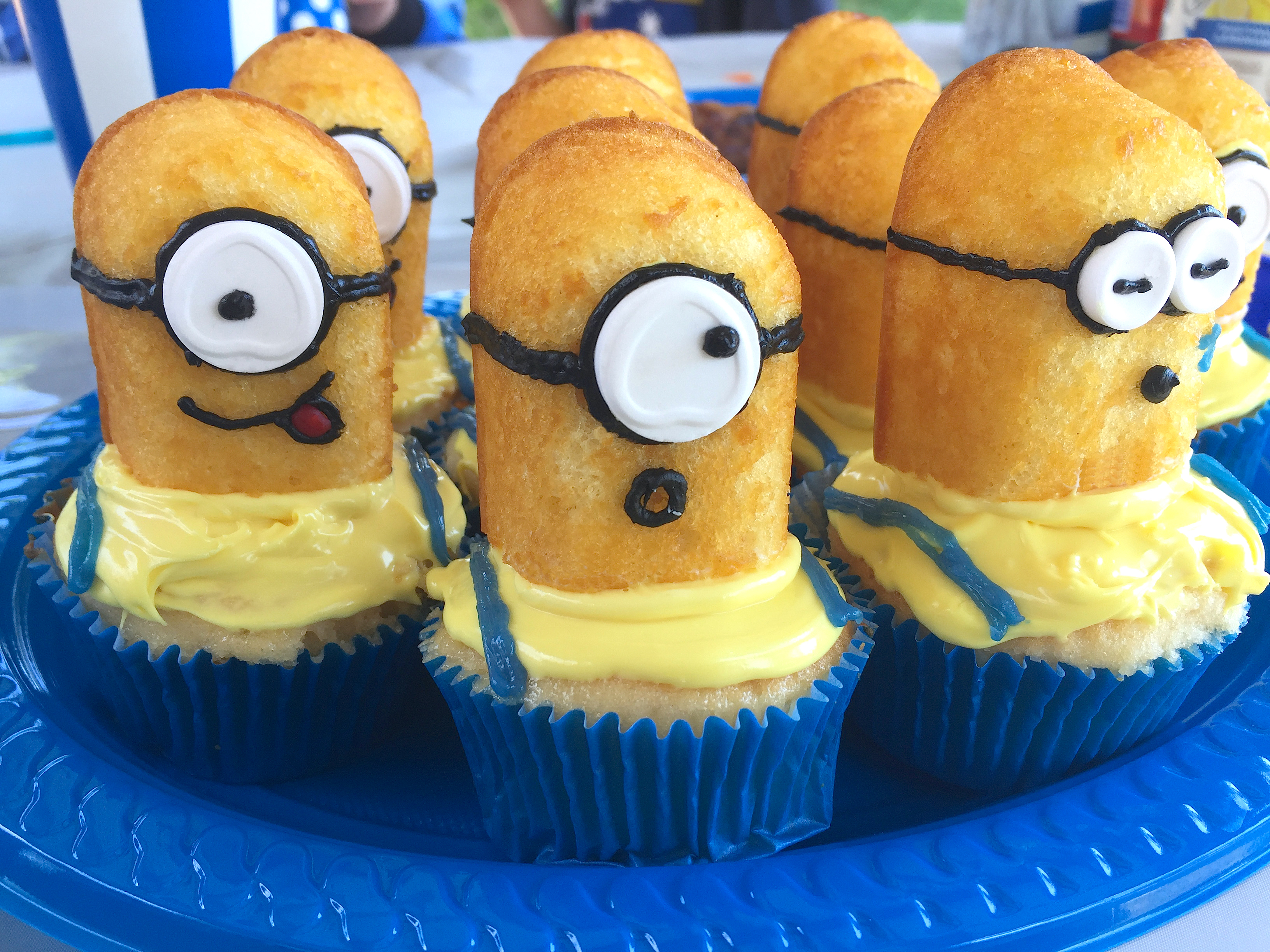 I love baking, so when my favorite little minion turned six, I was quick to pull out a fun cupcake idea I had tucked away months earlier. Where I found it, I have no idea… it was posted online somewhere – Facebook? Pintrest? Instagram?

Who knows – It was just too cute to not save and try.

Overall, they were pretty easy to make. The biggest drama I had was – of all things – finding Twinkies in Australia. My poor guy, after trying several places with no luck, I sent him out to one shop that sold them individually. $30 it cost him… for one box!!!

Anyway, I don’t think I’ve ever wanted Twinkies that badly… 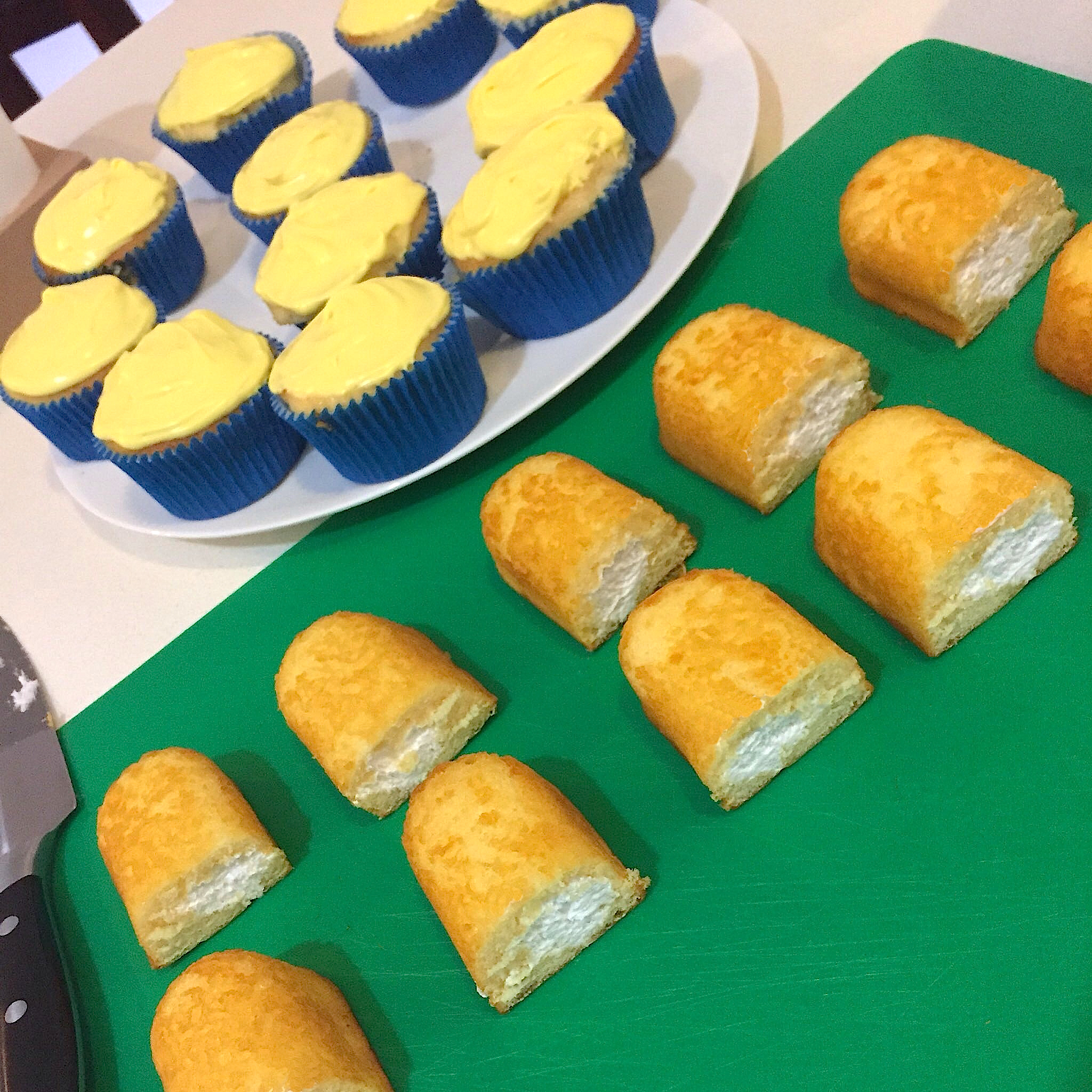 Beyond the insanely expensive Twinkies, I bought a few other things:

Following the directions on the boxed cupcake mix the night before, I placed the blue cupcake liners in the cupcake tray – filled them with batter and popped them in the oven. Once fully baked, I let them cool then placed them on a plate and covered them with plastic wrap for the night.

I did stray from the original photo I had gotten this idea from by going with only blue cupcake liners. Minions wear blue overalls… being a bit OCD when it comes to anything artsy… my damn minions weren’t about to have pink, poka dotted bottoms.

Besides – let’s be honest – nothing gets by kids! I’m sure, had I used anything but blue I would have been lectured on proper minion attire for half the party. 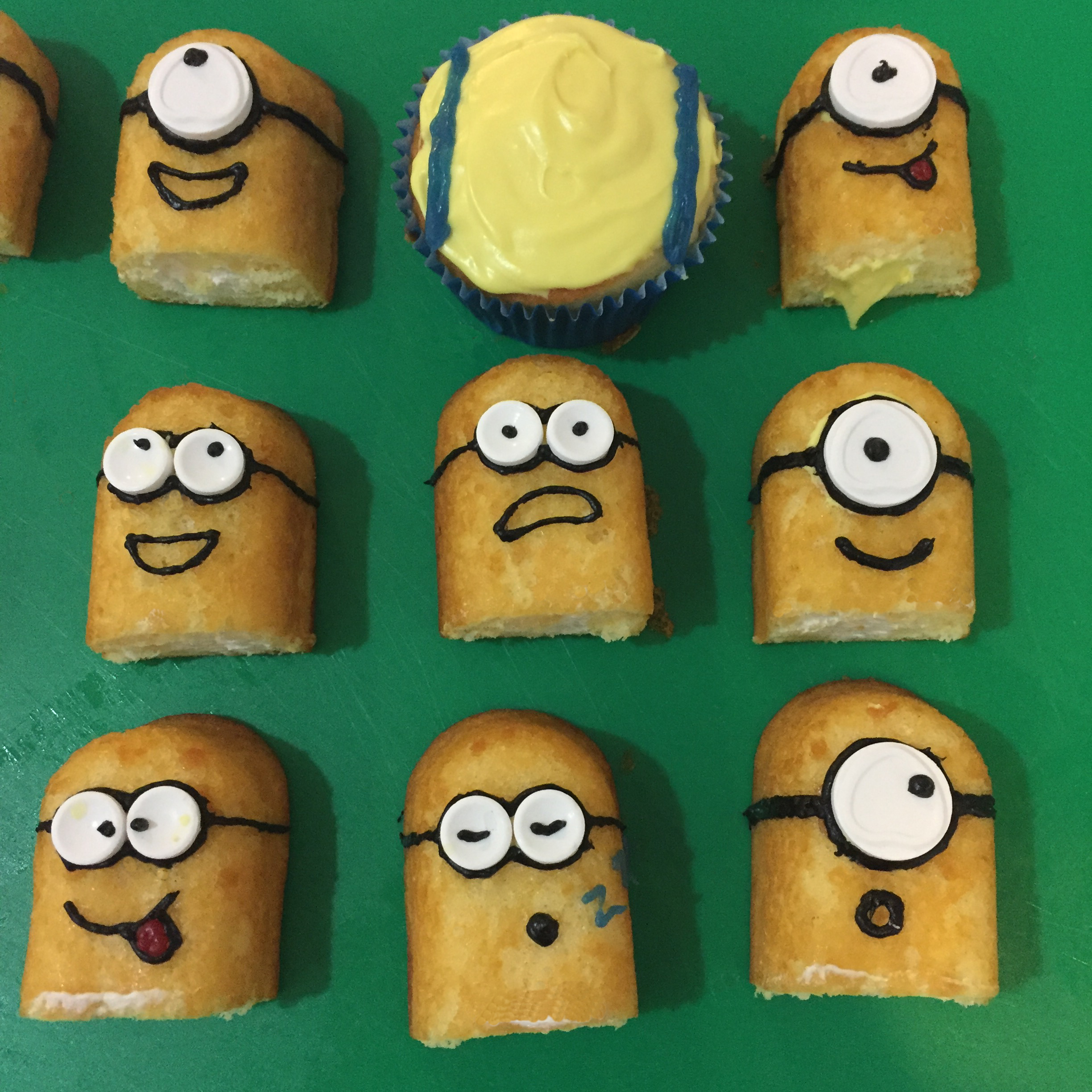 The next morning, I mixed some yellow food coloring into my white frosting until I got a color I was happy with and covered the tops of the cupcakes. Once all covered, I let them set for a bit while I cut the Twinkies in half.

For every one Twinkie, you get two minion heads.

Returning to the cupcakes, I used the Twinkies to get the right spacing for the overall straps then used the blue writing icing to draw them on.

From there, I moved to the faces using a dot of yellow icing to stick the Smartie eyeballs in place then outlined them with the black writing icing (further securing them) – adding the goggle band, eyes, mouths and other facial details.

With the faces, I strayed from the original photo idea again…

The photo that originally gave me the idea, had the same face for every minion – where’s the fun in that?!

Instead of a bunch of two eyed, smiling minions – I made one and two eyed minions, some smiling, some sleeping, some sticking out their tongues, some yelling and others surprised. Using the red writing icing, I colored in the tongues that hung out and added blue Z’s to the one who was sleeping.

If you’re going to make them – have fun with it! Why make them all the same?

Just keep it PG if its a kids party. 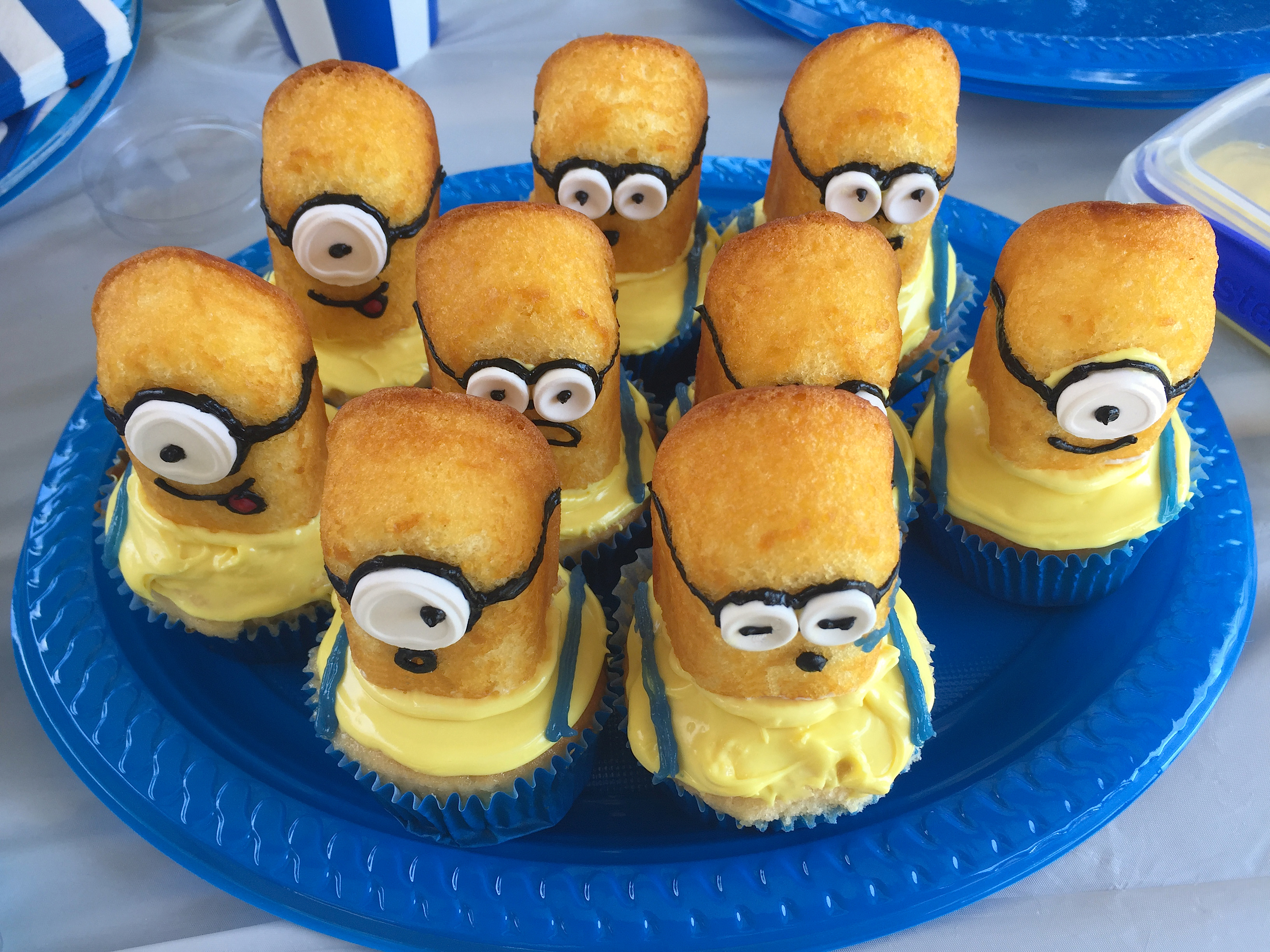 Helpful Tip: Thanks to the suggestion of a lovely lady on Twitter, I did not assemble the minions until I got to the party. Using containers, I transported the cupcakes in one and the minion heads in another (keeping them cool in a cooler or “eskie” as the Aussies say). I didn’t have a problem with the eyeball smarties sliding off but depending on the frosting and writing icing you use, they could easily be a problem. Leaving the heads cool and laying flat will help avoid this.

Once we got to the park, I assembled the heads and cupcakes. To help secure the minion heads, I brought some extra yellow frosting in a small container and applied it to the bottoms – lightly pressing them in place on top of the cupcakes.

It only took a couple of seconds to assemble – totally worth avoiding runaway eyes!

In the end, the kids loved them and got a kick out of picking out which minion they wanted by its facial expression.

Being Australian little ones… they were all a bit confused by Twinkies. It was funny watching them take a few bites, trying to decide if they liked them or not. For those who weren’t a fan, they still had the vanilla cupcake to destroy.

Outside of zombies movie, does anyone actually like Twinkies???

After 36 years, this American has finally found a good use for them thanks to the good ol’ internet. Overall it was a relatively easy, fun and creative alternative to the standard birthday cake.

I would definitely recommend giving them a go if you have a little one who’s crazy for minions!