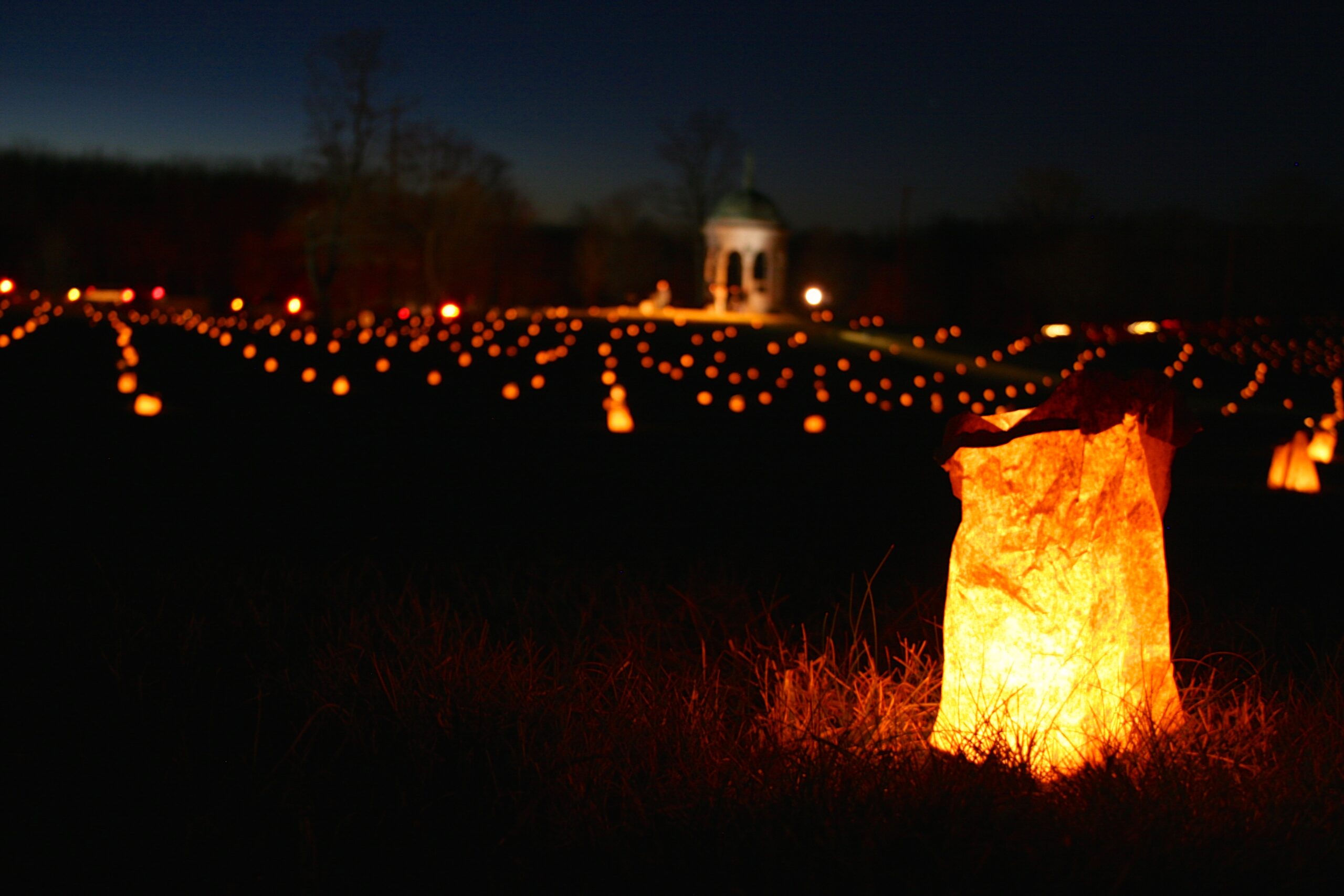 I would like to thank Holiday Inn for partnering with me to make this post possible. As always, all opinions are my own!

Have you ever learned of a location that left you with an extreme desire to go? For me, that was the Antietam National Battlefield. Not only did I have to get there someday, I needed to get there for a specific day.

That one special day, everything in me insisted on experiencing, was The Antietam National Battlefield Memorial Illumination.

I am willing to bet many of my readers will be left wondering the same things I did when I first heard of this location and event… What is Antietam all about? And what is an Illumination Memorial?

It is amazing how much we don’t know about our own history. While I am sure every American has heard of the Civil War, I think Gettysburg will be the one and only battle they are familiar with.

Although Gettysburg is definitely one of many battles that shouldn’t be forgotten, the devastation at Antietam is one most Americans have never heard of… Unless, of course, you live local to the battlefield or you’re a Civil War buff.

So, what was Antietam?

On September 17, 1862, about 100,000 soldiers engaged in battle in the small town of Sharpsburg, Maryland. Antietam, referred to as Sharpsburg by Southerners, was a 12-hour battle that left a total of 23,000 men dead, wounded or missing. Known as “The Bloodiest One Day Battle in American History”, it was a narrow victory for the Union Army.

There were a few things the Union gained from the victory at Antietam.

What is the Illumination Memorial all about?

The Antietam National Battlefield Memorial Illumination is an annual event that honors the memory of each soldier who was killed, wounded or went missing during the Battle of Antietam.

On December 5, 2015, I was fortunate enough to experience their 27th Memorial Illumination, which was hosted by the Antietam National Battlefield, the American Business Women’s Association and the Washington County Convention and Visitors’ Bureau.

In memory of each solider, a candle is carefully placed on the battlefield. In total, 23,000 candles line a five-mile route that is included in a driving tour.

During this driving tour, visitors are instructed to only use their parking lights and are expected to drive through without stopping or getting out of their vehicles.

Due to the popularity of the Antietam National Battlefield Memorial Illumination, lines to get into the event can be a two-hour wait.

I promise you; it is well worth it.

Starting my day at Visitor’s Center, I had a chat with the staff before grabbing some pamphlets and a self-guided Battlefield tour.

Jumping back into my rental, I started to make my way around Antietam’s 11 points of interest. However, before I could even focus on Antietam’s history something else caught my eye.

The first thing I noticed, which was hard to miss, were the volunteers. I had gotten to the battlefield around 10am but you could tell they had started their day hours earlier.

Young and old… Boy Scouts, Girl Scouts, veterans, local organizations and residents. Working in large groups, they carefully placed each luminary. Using rope, they worked tirelessly to be sure each was placed with the others in straight lines.

Watching the process and the number of people involved was pretty impressive.

While there are several points of interest at Antietam, I have decided to highlight the ones that affected me the most during my visit since It would be impossible to cover each location and monument properly in this short article.

Built in 1852, this little church became the center of several attacks made by the Union Army against the Confederates. As if a battle breaking out around a church wasn’t odd enough – the use for it following the battle would put a chill up most spines.

The three-hour battle, which took place on The Sunken Road is an unimaginable one. In that short period of time, 5,500 men were killed or wounded… earning the otherwise quaint, country road the name, Bloody Lane.

The survivor’s stories of the battle are horrific to say the least. Then there are the photographs that show the old farm road over flowing with the dead…

For a place that would otherwise be viewed as peaceful countryside – this location was once someone’s worst nightmare and final resting spot.

Antietam National Cemetery was created to solve problems the large number of dead created for the living. Originally, soldiers were buried where they fell in shallow graves. Before long, the bodies started resurfacing.

Besides the fact this would be a horrific sight, this problem would lead to disease and death for those living in Sharpsburg. In order to solve the problem, money was raised to build a cemetery to bury the dead.

At first, the plan was to bury both Union and Confederate soldiers in the new cemetery. However, tensions between the North and South were still too fresh. To deal with the problem, Confederates were moved to three local cemeteries while 4,776 Union soldiers were moved to the newly created, Antietam National Cemetery.

Before it became a cemetery, this plot of land was used by Confederate artillery. Today, you can visit and pay respects to the Union soldiers who were buried here, as well as dead from four other wars.

Headed back to the Visitor’s Center with a new appreciation of Antietam, I was lucky enough to attend the Illumination Ceremony.

During the Illumination Ceremony, many people involved in the memorial including organizers, volunteers and state representatives spoke on the importance of the Memorial Illumination and what it has meant to them personally. There was prayer and song for those who died during battle. At one point TAPS could be heard from Dunker Church followed by Amazing Grace on bagpipes from the Visitor’s Center.

It was during this ceremony that I learned the Antietam National Battlefield Illumination was in its 27th year and 1,500 people volunteer annually to help setup the candles.

The fact that that many still people care today, about an event that happened so long ago, left me speechless.

There were several points during the ceremony that touched me, but the moment that stuck with me most of all came when a musician approached the microphone.

Taking to his guitar he began to play as he sang the words to Hallelujah. His voice and the words to the song eerily drifted over the battlefield and with it my heart sank.

The reality of my trip, of the whole experience had finally hit. With a fresh pair of eyes and a sun that was quickly setting, I stood surrounded by thousands of flickering little bags of light.

These flickering little bags of light stood in formation, stretching for as far as I could see in all directions.

23,000… each representing a husband, father, brother, son, uncle and friend who had died, had been wounded or had gone missing where I stood in a 12-hour battle.

To say I was overwhelmed with emotion would be an understatement. I wondered if it were strange to be so emotional over an event that took place long before I was born?

As the ceremony came to an end and the crowd began to disperse, I found myself left behind in the silence with a handful of others who had permits to photograph the memorial.

As I sat, surrounded by candlelight, I realized two things.

The Civil War wasn’t some far off battle fought between two foreign lands. It was fought in our own backyards and pitted our ancestors against each other. It tore families apart, leaving in its wake hundreds of thousands of dead and left a generation of Americans in shambles.

I would encourage everyone reading this article to visit.

From the history of the Antietam Battlefield itself, as well as the buildings and memorials that stand as reminders of the past, to the 1,500 volunteers that give up countless hours to thoughtfully place each candle and the hundreds if not thousands who wait to enter the memorial each year…

The Antietam National Battlefield Memorial Illumination is an experience I will never forget.

I will be forever grateful to the Holiday Inn for helping me check this must see destination off my list and – I look forward to returning one day.