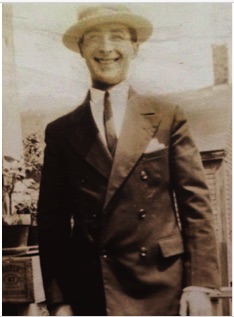 My great grandfather, Abramo Donato Cantelli was born in San Donato, Italy on February 4, 1903. He was only six years old when he boarded a ship headed to America called the Canopic Line with his mother and two brothers. After two seasick weeks they finally landed in Boston where Abramo’s father was waiting for their arrival.

Abramo attended school until he was 12 years old, leaving to work at the Fore River Shipyard in Quincy, MA to help his family. There he made $80 a week working on destroyer ships during WWI. It was at this job, he began to hate his name. His co-workers regularly picked on him for it, “There’s a lot of ignorant people, they make you feel like two cents”. Due to the constant harassment, for his confirmation, he took on the name Biajo so he could call himself Joe. From then on, he was known as Joseph Cantelli.

Joe started an apprenticeship as a stonecutter in South Quincy around the age of 21. He worked on several different jobs but the one I was told most about was a statue of a woman. He worked on the folds of her dress as well as some writing. No one in the family seems to know where this statue ended up but we do know Tiffany’s of New York bought it. During the Great Depression he said that “It was impossible to live on stonecutting…Life is too hard. In the depression if you wanted to buy a nickel for six cents you couldn’t do it”.

My great grandfather was extremely proud to become an American and worked hard to fit in. Besides the name change, he refused to teach his kids to speak Italian. He would often tell them, “In America, you speak like an American!”. Joe would only speak Italian with his parents, brothers and sister. As much as I admire his pride and hard work, it also bums me out that this part of my family’s culture wasn’t passed down. Today, the best my grandmother can do is swear in Italian and I’m left trying to learn with CD’s and books!

My great grandfather gave a lot of advice through his own life experiences concerning work, family and remembering to enjoy the simple things. It’s his advice on relationships and marriage that have really stuck with me most.

Joe met my great grandmother Kathryn Mary Gaynor at a dance. They were married October 14, 1923 in Randolph, MA with a simple ceremony to keep costs down. The thing that I love about my great grandparents is how crazy they were about each other. I remember talking to my grandmother’s sister Kitty about it. She told me a story about how they were so affectionate with each other, even late in life; they could make others around them blush.

In a day and age where divorce is common, I really want what they had for myself. I have had several friends my age, who’ve been divorced, joke that I need a “practice marriage”. The idea of this being funny saddens me. Being a bit of a hopeless romantic in a “me generation” is difficult at times to hold on to. His advice on relationships and marriage holds true, especially in today’s society. Today we are so plugged into technology; we are forgetting how to communicate outside of it.

“When you get married, you become one. There’s no more two. It’s 50/50. Set up a stake and both of you reach for that goal. Sometimes his trouble will spill over onto you. If you think you might hurt each other with something you’re going to say, put on the breaks, and don’t say it; don’t hurt each other. Think first about what you’re going to say. It’s communication that’s the most important thing. You’ve got to be friends. Both work together, plan together and communicate. When you don’t communicate, no one knows what’s going on, the left doesn’t know what the right is doing. That’s why there are so many divorces these days. They don’t communicate, and they don’t know what the other wants. They have different goals.”

As a female today, I have also found that sometimes I feel a little lost. Women have come so far since his generation. The sad part however, is that today women who find themselves in a demanding career are almost forced to make a choice. Do I continue to climb the ladder or do I want to have a family? It’s a sad world when you are made to feel like having a family is a “set back”. Growing up, taking pride in being a strong female, I always said I didn’t want to just be a mom… where today, I have realized it will probably be the most important role I’ll ever play.

“That’s what I like to see, two young people in a garden of flowers. That makes me happy, to see… two people always together and happy. You need to get a nice little house, with a little fence and a little workshop downstairs. It’s natural to want a house and family”. To me, he is right. I am tired of feeling like I have to reject something that is natural to want, just to prove something to a society that’s slowly losing sight of what’s important.

My great grandparents were married 61 years when Kathryn passed away, “We miss each other. I am useless with out her”. I can only hope to someday celebrate 60 years of marriage with a man who feels just as strongly about me. Someone who makes me want to be a better person by simply being around him. Jobs come and go. Money can be gained, lost and gained back again. Fancy cars and big houses prove nothing. It’s family and the people we surround ourselves with that get us through and make life worth living.

The craziest part about all of this, my great grandfather passed away in 1986, when I was only five years old. The only memory I have of him is hiding under his lawn chair at a family reunion in Quincy, MA. However, here I am 26 years later hearing and finding comfort in his words. I owe a huge thank you to my Mom’s cousin Suzy for taking the time to interview him. Had it not been for her interest in genealogy and our family in general, I never would have had the opportunity to hear them.

“Don’t go by what you see on T.V., it’s a big balloon that’s blowing up and destroying the country. Show business is no good. My wife had better legs than those women any day!”