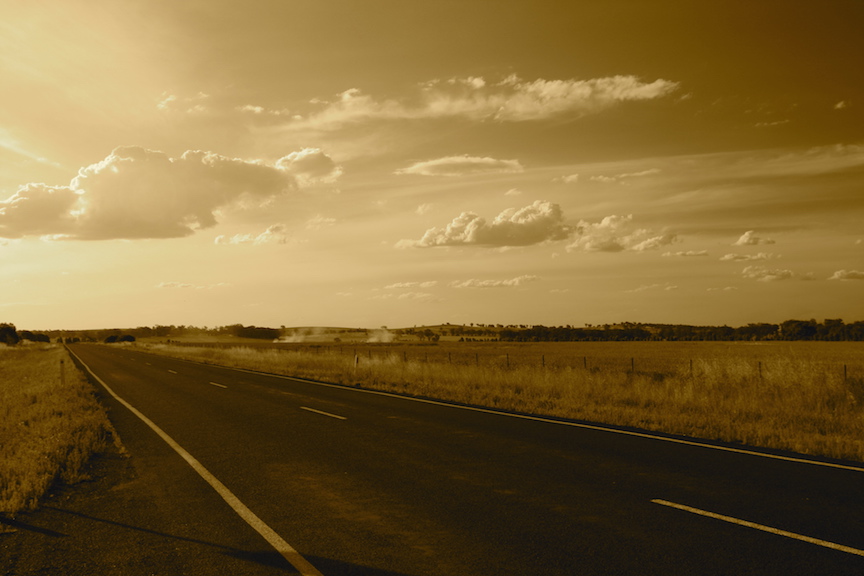 In Australia Driving on The Left, Taken by @CaptnWing_n_it, December 2011

Having spent a lot of time in Australia, I’d say the biggest challenge I have faced has been getting around my fear of driving.

Here in the United States, I love driving. It has always given me a sense of freedom and a chance to escape. Long stressful day at work? Disagreement with a friend, family member or your other half? Feeling stir crazy? The answer for me was always to jump in my car, blast some music and go for a cruise.

Although I had been to other countries before that drove on the left, I really didn’t do much driving in them. If I did, I was part of a five-vehicle convoy and all I had to do is be sure to not lose the cars in front of me and follow their lead.

Australia is different. Its not a quick stop for work, it has become my second home. The Captain goes to work and when he does, I am on my own. Luckily he lives in walking distance to a ton of shops, restaurants and hiking trails. Beyond that, he had given me a bike for Christmas one year so I have used that to get down to Lake Burley Griffin and the surrounding museums.

After avoiding the challenge at all costs, the Captain insisted on my last trip that it was time for me to learn.

Working as a pilot, he can be away for days at a time, which left me at the apartment alone with no transportation while his car sat at work OR he’d take a cab to leave me with a perfectly good car, sitting in a parking garage that I refused to use. It was silly. I really couldn’t argue with him… don’t tell him I said it… but he was right.

For someone who loves driving, what were my reasons for avoiding it in Australia?

My third reason may sound a bit strange. However, I have found driving at home (on the right) can be dangerous following a trip that had you driving on the left. Why is that?

Then you return home.

You’re now at home, where you are comfortable driving on the right. You know what you’re doing, at least you think you do. For those reasons, you don’t think so hard about it. You don’t worry. You’re not as aware as you were overseas and before you know it you’re driving down the left side of the road because that’s what you just spent the week plus doing.

It may sound silly, however there were several times I almost got hit just crossing the street once I returned home because I looked the wrong way first before crossing. This is a pretty common mistake that I have heard other travelers make upon returning from a trip.

Funny enough, the streets in Canberra have markers spray painted on the streets for morons like me-letting you know which way to look before crossing. Doesn’t do me much good once I return to New Hampshire (weekend spray painting project perhaps?).

How difficult is it to drive on the left?

Let’s start with the car.

Doesn’t sound all that difficult?

Going around “roundabouts” (rotaries) the opposite way (around clockwise rather than counter clockwise).

Add to the confusion (at times) by getting directions by a local. Example…

Captain: Go through the roundabout and take a right…

Captain: No, take a right…

Me: Take a right where? The only right I can take is to continue around… I like the view and all but I don’t care to stay on the rotary all day…

That’s when he explained that in Australia you don’t see 4 way intersections like you do in the United States. Four-way intersections in Australia are turned into rotaries… So when he said, “go through the rotary and take a right” he meant “go through the rotary and take the 3rd exit” OR “take a right at the four way stop”. In most cases driving with a local is HUGELY helpful but be prepare for moments of confusion-even if you speak the same language.

Speed cameras everywhere that will “book you” (ticket you) for barely going over.

In the states, an officer my lawfully stop you if you give them reason to (probable cause). You can then be subjected to a breathalyzer test if they believe you are under the influence. This is not the case in Australia. Everyone gets stopped at a Sobriety Check Point and EVERY driver is required to take the breathalyzer. There is no argument for probable cause-if you drive, you are subject to taking one. This is one of those times where you leave the “being an American” attitude at home because you are not in the U.S. Their country, their rules. Lesson being-Australia has zero tolerance for stupid.

The passing (or “overtaking”) lane on a double lane highway is located on the right.

Finally add the lines on the street being different from home.

In the U.S. we have yellow lines that break up the two oncoming sides of traffic …in Australia it’s not like that. There are white lines everywhere, so I always have to be extra cautious since it makes me feel like I’m on a one-way street-when I am not. The only time I have seen yellow lines is to mark places not to park, stop, etc.

Best piece of advice for driving on the correct side of the road?

Regardless of whether you are in Australia driving on the left or the United States… the driver sits closest to the center line of the road. If you can remember that, it makes staying on the correct side of the street much easier (especially when it comes to making turns at an intersection).

Overall, it isn’t impossible. Be aware and be careful. If you have a GPS or map app that obviously takes away the stress of getting lost, then you can focus on safety. It took me only a few days to feel comfortable with driving on the left but I do want to stress the importance of being cautious when you return home.