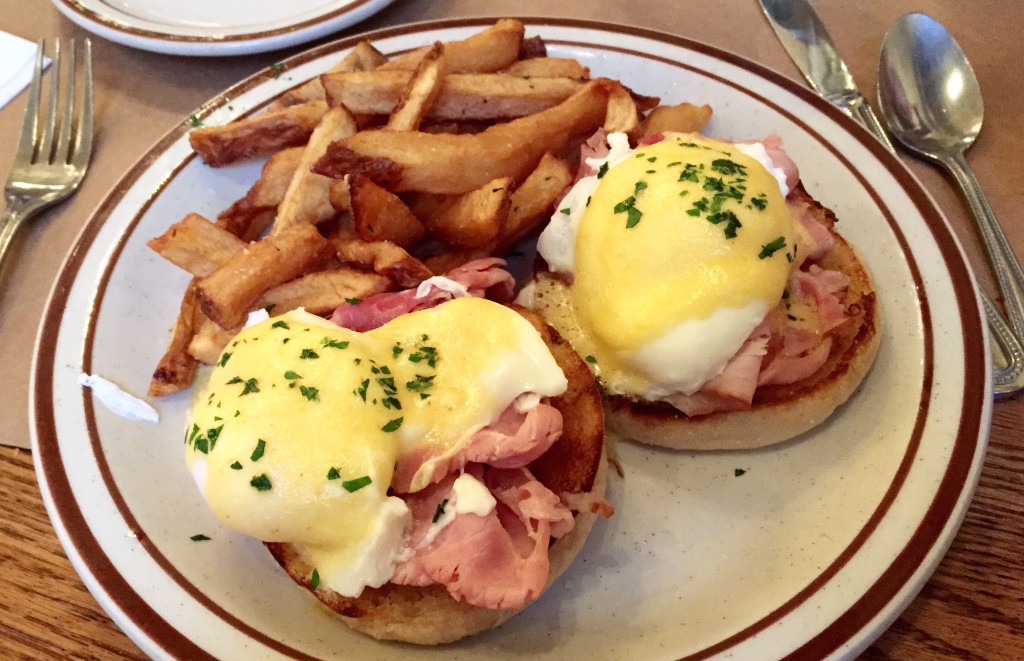 Have you ever had breakfast in a brothel?

Let me start by saying it wasn’t on purpose.

On our last morning in Argentina, I woke up in Buenos Aries looking for a little solo adventure. It wasn’t very often I strayed from the hotel alone but I was feeling up to the challenge and thought I’d see how much Spanish I remembered from my school days.

Wandering out onto the streets, the city was pretty busy. I couldn’t tell you now where the heck I was or where we stayed but with a short walk I found myself in a busy tourist area.

The streets were lined with shops and restaurants and filled with people out for a stroll. While this area was nice, I was hoping to find something quieter for breakfast. Taking a couple of side roads, I found myself standing across the street from a bar that funny enough served breakfast…

The outside stood out against the surrounding structures with its weathered wooden face. There was a lot character and charm in this old building… and strangely enough no sign displaying the name of the establishment (this should have been my second clue).

Being a sucker for old locations, I remember thinking, “this is it!”

Walking into the bar, without looking around too much, I grabbed a small table for two by the window. Within seconds a friendly server greeted me and handed me a menu.

There I was, sitting in the capital of Argentina, ordering eggs and ham for breakfast in Spanish-all by myself like a big girl!

“If only Señor Farlow could see me now!” I thought.

As I sat at the table, reading my book feeling a sense of accomplishment, something out of the corner of my eye caught my attention…

At this point, I had been in the place for twenty minutes… Being so content with my small corner of the world, I hadn’t taken a second to look around until then.

Can we say unexpected learning experience?

The exterior walls of the bar were lined with windows on three sides… In front of each window was a table for two… just like the one I was sitting at.

Unlike my table though, all the others had two girls occupying them. The girls, aged between late teens to early 30’s, were dressed like they were ready for the club… skimpy, tight fitting clothing with the makeup and hair to match…

Confused I looked toward the bar. Normal looking, middle-aged couple having a drink… At the table diagonal to me, a man in a suit in his early 40’s eating breakfast. All three looked unfazed going about their business.

Feeling like I had just found myself in an episode of the Twilight Zone my eyes returned to the girls. This time I noticed most of them were looking right back at me.

“What in the world is going on?” I remember thinking. “Do I have something on my face? Was my Spanish really that horrible? Have I done something rude unknowingly?”

And then, the light bulb lit.

“I am having breakfast in a brothel! …holy crap… Have I just taken up some girl’s prime real estate?” I thought, after realizing they were only sitting in window seats.

“Oh, Jesus! Do they think I’m a working girl?! No… I’m sitting here with a book and wearing too much… they’re probably just making fun of the stupid tourist…”

Finishing up my breakfast (which was pretty good I might add) I paid for my meal and headed for the door to be sure I didn’t miss my ride to the airport.

Arriving back at the hotel, one of my co-workers could tell by the look on my face something was off.

“I think I just had breakfast in a brothel…” I responded.

Funny enough, I wasn’t the only one. After a short chat with him I learned two other coworkers had a similar experience.

Eggs and ham with a side of call girls.

While this experience was nothing short of strange and has made for quite the story over the years… I would like to go back to Buenos Aries.

Personally, there was never a point where I felt unsafe walking around and really-I was no more uncomfortable in the situation than I was in the Red Light District in Amsterdam… or even parts of Vegas for that matter.

It was just the shock of not knowing how prevalent brothels were in Buenos Aries or that they were that easy to wander into. Knowing what I know now, I would be more aware of my surroundings before choosing places to hangout!

That said, I did enjoy my short time in Buenos Aries and I look forward to going back to get a better sense of what Argentina is all about.

Have you ever been to Buenos Aries and have had a similar experience? I would love to hear about it, any advice you might have for avoiding the brothels and any other adventures you’ve had in the city below!

Thanks so much for reading, commenting and sharing!